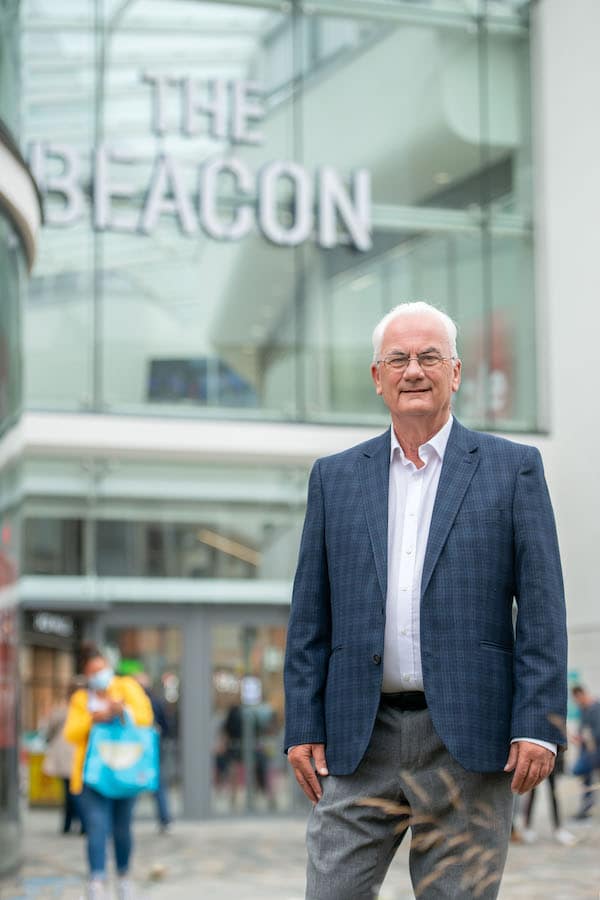 Bill Plumridge, manager of The Beacon (formerly Eastbourne Arndale) shopping centre for 31 years, will retire at the end of this month.

During his three decades at the helm, Bill saw transformational change to the Centre with the £85 million extension that added an additional 170,000 sq. ft. along Terminus Road as far as the railway station.

When the new mall opened in 2018, with a brand new first floor and entrance, the face of Eastbourne town centre had changed forever.

Bill joined the Legal & General-owned Arndale Centre on May 1, 1990. He leaves The Beacon, rebranded in 2018, on July 31, after an extraordinary final 16 months during the Covid-19 pandemic.

During his time at the Centre, he launched and ran Win A Car, a Christmas event that involved nearly 40 charities every year and raised over £340,000 in 20 years.

Moving into shopping centre management felt like a natural progression and he went for his interview after only one previous trip to Eastbourne as a buyer for Army & Navy and a request from a colleague to buy lots of rain hats!

Bill, who has seen his role constantly evolve over the years, said: “In the early days my role was concerned with maintaining and improving standards in terms of security, cleaning, maintenance and marketing. But in recent years, marketing has become far more sophisticated with the growth of social media and we are far more aware of our carbon footprint and the need to reduce waste and monitor our energy use.”

In 1997, Bill oversaw a £5 million refurbishment that upgraded the roof spaces and allowed natural light into the malls for the first time. Other changes over the years have included Sunday opening and the introduction of No Smoking laws.

One of the biggest challenges was managing the Centre during the construction work of the extension.

Bill said: “Carrying out the refurbishment and seeing the construction of the extension was a great, but rewarding challenge, with the end result of the project being there to see. It was a fantastic moment to launch the extension as it was something that was very much needed for the regeneration of Eastbourne and a project that had been eagerly awaited by local people.”

The Centre’s work in the community has been a huge focus for Bill over the 31 years.

“It has been hugely rewarding working with local charities to raise their profile and much needed funds for so many good causes. My proudest moment would have to be the launch of Win a Car that went on to raise more than £340,000, with every single penny raised during that time given to charity.”

During the past 16 months, he has seen the inevitable impact of Covid-19 on the retail world but remains optimistic about the future.

“The enormous growth of online shopping during the pandemic has impacted the way people shop but the retailers that offer the best level of customer service will continue to thrive. Eastbourne has always been successful, but with no tourists or foreign language students, the whole town has been affected.

“Shopping centres and towns will need to refocus by attracting more leisure and community ventures into vacant spaces. There will be a conversion of some buildings into residential and the town will need to provide services and attractions that retain customers in the town centre.”

Bill said the aspect of his work that he will miss the most will be the people.

“I will miss all the great colleagues that I have worked with, the tenants, the Centre team and all the contacts that I have gathered over the years. There is a large organisation behind The Beacon and I am grateful to have been part of it.”

Andrew Rice, Fund Manager for Legal & General, said: ““I would like to personally thank Bill for his dedication, hard work and contribution to The Beacon over the last 31 years.  Bill has been an exceptional centre manager and it has been an absolute pleasure to work with him.  Bill will be sorely missed, but I wish him a very happy and well-deserved retirement.”

Cllr David Tutt, leader of Eastbourne Borough Council, said Bill had been “part of the fabric of the town.” David said: “Bill has always been very approachable and has supported a significant number of local community groups, including one very close to my heart – Young Enterprise, which identifies and trains young entrepreneurs. Bill has provided the group with space in the shopping centre on an annual basis. And anybody who saw Bill ride a Harley-Davidson through the centre, complete with black leather jacket and sunglasses, will know that he also has a great sense of humour.”

Eastbourne MP Caroline Ansell said: “Bill has been at the heart of our wonderful town for many years. He has been involved in so many great community activities and events that he will leave a large gap to be filled. I do hope he will continue his involvement in – and love for  – the town long into his well-deserved retirement.”

As Bill heads into retirement he plans to take a couple of months off with Carol, his wife of 41 years, at their Seaford home, and spend time with children Melanie and Jonathan, three grandchildren and their new puppy! A few games of golf will be played and then he aims to get involved in some voluntary work.

Sign up here to receive the latest information from The Beacon.